Getting off to the right start: Auto insurance for foreign drivers

Just arrived in this country and want to drive? Learn about car insurance for foreign drivers as soon as possible.

Well, you made it to the U.S. Welcome! Whether you're here visiting or starting a brand new life, one of the first things that surely crossed your mind is being able to drive. Clearly, having a driver's license will be the first step. But apart from having a license, and unlike in many other countries, in the U.S., you're required to have auto insurance in order to drive, in most states. We've gathered helpful information to assist you. The road awaits. Let's get started.

Here in the U.S., everybody needs to have two things before they can drive: a driver's license and, in most states, vehicle insurance. The rules for both of these are different depending on the state that you live in. Typically the DMV (Department of Motor Vehicles — which is in charge of issuing licenses, license plates and vehicle titles) requires that you have a social security number in order to get a license. However, don't get too discouraged if you don't have one. More and more states are able to help people obtain a driver's license. Check the rules of the state that you live in to see if you're eligible.

Can I purchase car insurance with an international driver’s license (IDP)?

Yes, it’s possible. Depending on the country you’re from and the state you’ll be driving in while in the U.S., you may be able to use your home country’s driver’s license. In addition, you can obtain an international driver’s license which will allow you to drive in the U.S. and many other countries. If driving on your country’s license, it may only be allowed for three months, where an IDP could allow up to one year.

There are cases where some insurance companies don’t insure foreign drivers. Most major companies, including State Farm®, do insure those that meet the state requirements.

Car insurance: Do I need to start from scratch?

When it comes to car insurance, everything depends on the coverage that you choose, although an insurance company might charge you a bit more at the beginning. It doesn't matter if you have years of experience driving in another country. When you don't have a driving history established in the U.S., you're considered a "new driver."

Who does car insurance help protect?

Have you ever wondered why it's mandatory to have car insurance in order to drive here in the U.S.? While it may seem a bit of an exaggeration, every time a person drives they are exposing themselves to the risk of having an accident. If this were to happen to you and you didn't have insurance, you might have to pay out-of-pocket not only for repairs, but also for medical expenses for both you and the other person. And you've probably found out by now just how much those kinds of things can cost here. In other words, your hard-earned savings could be spent up on a car accident. Liability insurance helps protect you and your family for damages you are at fault for up to the amount of policy limits you choose.

The minimum required... it's not the same everywhere

Now, practically all of the states require that you have at least liability coverage, which generally pays for property damage and medical costs for injuries if you are considered at fault in an accident.

Liability coverage only covers expenses caused by you to others... and not your own. Some states have minimum coverage requirements. Coverage for your own medical expenses is called Personal Injury Protection (PIP), or Medical Payments Coverage (MPC). Which coverage is available to you depends on the state where you are seeking coverage. In certain states — like Michigan, Delaware, Florida, New York, Pennsylvania, etc. — it's mandatory in addition to liability coverage. Even if you have PIP or MPC coverage, damage to your car is not covered in the event of an accident. You would need collision coverage for your car, which is not mandatory in any of the states. But you may want to consider this coverage in the event that you get in a car crash and don't have the money to repair your car.

If you'd like to find out more on the topic, State Farm provides information on various types of coverage to assist you in making the right decisions.

Aside from liability coverage (coverage for property damage and Bodily Injury to others) and PIP coverage, one or more additional coverages are required in states like New York, Kansas, Massachusetts, Minnesota and North Carolina, among others. The most important ones are uninsured motorist coverage and underinsured motorist coverage. With both, you have coverage in the event that you run into a problem with someone who doesn't have insurance or whose coverage is so minimal that it doesn't cover the resulting damages or medical costs.

What happens if I drive without insurance and I don't get into an accident?

Ok, so suppose that none of this is convincing enough and you think you'll be able to drive without having an accident. You could get stopped by the police for any other reason just the same and, if you're driving without insurance, may have to pay fines ranging from $50 to several thousands of dollars. Even worse: If they catch you doing it more than once, you risk having your license and registration suspended or revoked.

In short, when it comes to insurance in the U.S., there's a lot to learn. You don't need to know it all, though. A State Farm agent can help explain often in the language that you speak. There are plenty of agents that are bilingual or that have bilingual staff — all of which are ready to lend a hand.

What if I’m vacationing from Canada?

If you have a Canadian driver’s license and insurance, you may drive in the United States while on vacation using your existing Canadian insurance coverage and driver’s license. If you are moving to the U.S. you’ll need to register your car at the DMV of your new home state and obtain insurance.

First Time Car Insurance: What You Should Know

Getting car insurance for the first time? Here is what to know about policy terms, coverage and potential discounts.

How to Register a Car at the DMV

Car registration requirements at the DMV can vary depending on the state that you live in.

How Much Car Insurance Do I Need?

Learn about coverage limits, collision and comprehensive, deductibles and other important terms to help decide on how much is right for you and how you can save. 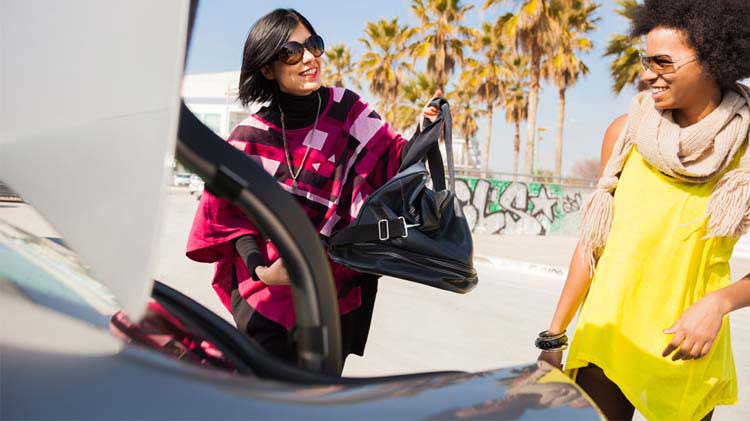 Rental Car Insurance: Is It Necessary?

Understand your coverage before signing any rental insurance agreement.